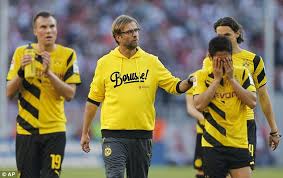 It’s been a hopeless season for Borussia Dortmund. Right from being Champions League runners-up in the 2012-13 season, their Bundesliga campaign had them considering the possibility of needing to fill out a second tier application for the first time ever.

Yes, they dropped to almost 18th place, thanks to a dismal season where a string of losses saw them drop steadily – much to the fans’ dismay.

One can attribute this to a number of injuries that put them but also to tougher competition in the Bundesliga.

Yet what has become obvious to fans is the transfer of key players such as Mario Gotze and Lewandowski that has really pulled their level of play down by a couple of notches.

Of course, Marco Reus has remained despite a bunch of rumors stating that he would move on to Barca in La Liga or even to Manchester United in the English Premier League.

Mkhitaryan, Hummels, Immobile and Aubemayang remain at Borussia Dortmund as well while the return of Kagawa has done little to get them back into the top 4 so as to qualify for Champions League.

In all probability, they will finish the season mid-table despite the fight back from a position where relegation to the second division was a distinct possibility.

Having said that, they can still find some cheer from beating their derby rivals Schalke 04 who are placed higher in the table apart from defeating Bayern Munich on penalties to meet Wolfsburg in the DFB-Pokal finals scheduled for the end of May.

A DFB-Pokal finals win means a Champions League place… and which would mean that their poor form over this season would effectively be cancelled out much to the joy of millions of Borussia Dortmund fans around the world and at home.