Home / Sports & Recreations / Will Lewandowski Give Messi and Ronaldo a Run For Their Money? 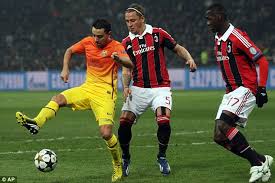 As most football fans know, Messi has already won 4 Ballon D’Ors. Ronaldo has won 3 so far.

The latter has won the Ballon D’Or thrice and just one behind Messi since 2008. What is also clear is that he has been the better individual performer of the two in the 2014-15 season.

When it comes to the number of goals scored last season, Messi has scored about 58 to Ronaldo’s 61 goals for the season. Messi has 27 assists to Ronaldo’s 24. However, Ronaldo managed to achieve this in 54 appearances for Real Madrid while Messi managed it in 57 appearances.

So, you can see that there’s very little difference between the two for last season. But there’s a bright new star on the horizon in the form of Lewandowski who put 5 goals past Wolfsburg in just 9 minutes.

He’s been on a roll during his time at Bayern Munich. While he scored only 25 goals last season, his best ever has been 36 goals for Borussia Dortmund in the 2012-13 season.

It clearly look like he will surpass this by the end of this season given that his goal tally is already at 17 goals in all. This is because there is almost 7 more months of club football to be played.

Without a doubt, if he manages to beat his best and scores at least, 50 to 60 goals then Messi and Ronaldo will find themselves faced with a new challenger when, for years, there has been none.

With a first team such as Bayern Munich to back him, it doesn’t seem entirely impossible given the amazing start he has had to the 2015-16 season.