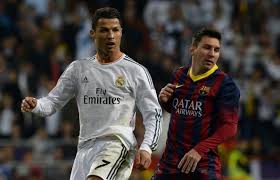 For a while now, both these footballers have been busy breaking records both in the Champions League and La Liga – the Spanish first division.

In fact, the season ended with Ronaldo scoring far more goals than Messi did. Yet the reason why Spain voted for Messi being the better player was because of the double treble that Barca, thanks to his efforts.

It’s clear that winning trophies is far more important than that of individual prizes. Yes, Ronaldo won the Pichichi trophy but his efforts for Real Madrid wasn’t enough to win him anything else last season.

Of course, it should be mentioned that the 2014-15 season was also the season when Messi became the highest scorer ever in La Liga, breaking a record that has remained untouched for decades.

Even then, the number of goals between the two was a mere 3 goals while Messi has 5 more assists for the season as well.

For making 54 appearances, Ronaldo scored 61 goals and made 22 assists. Messi made 56 appearances while scoring 58 goals and making 27 assists. For the both of them, the majority of the goals came from playing in La Liga. As for Champions League, they both scored 10 goals while Messi made one additional assist.

Yet with their stats running neck-and-neck, the real difference maker was the number of trophies that Barca won last season. Being the first club to win a double treble is remarkable – another achievement apart from the winning the sextuple. It was also why Messi was awarded the UEFA Best Player in Europe award with Suarez and Ronaldo being nominated for the top three spots as well.

Of course, despite winning these trophies, Barca’s season with their games against Athletic Bilbao has gotten off to a rocky start. It remains to be seen if they can continue playing in form as they did last season too.